Auckland station is essentially Classical by design. Three storeys high, with a basement and with mezzanine additions, it is of steel-frame construction faced with brick and granite. The city elevation, symmetrical around the main entrance, is dominated by the sweeping ramp that separates the basement from the ground floor. This elevation has a central portion with three massive arched windows and a suspended verandah, and two wings, also with verandahs. There is a slender pitched roof above. Rusticated stonework is used to enliven all four elevations. The large sash windows are arranged in a strictly orderly fashion on all four elevations. The interior is dominated by the former booking hall, three storeys high and Classically and ornately decorated. There were numerous offices on the upper floors: only the ground floor was (and remains) public space, including a café. There were subways and ramps within the building and also behind it, leading to the platforms, where the remains of the verandahs mark the link with the former railway tracks.

Auckland's first station was at Britomart Point and opened on 24 December 1873. A simple class 3 station, it was replaced by a much larger brick building at the foot of Queen St. Opened in November 1885, it cost £12,168 to build. The Queen St site was eventually considered too small for the rapidly expanding rail business, especially after adjacent land was taken for the new Chief Post Office. Tenders were called in 1927 and the new station opened on 16 November 1930. Designed by the prominent Auckland architects Gummer and Ford, it won an NZ Institute of Architects Gold Medal in 1931. The distance from downtown Auckland was soon regarded as inconvenient and was an impediment to passenger services until the opening in 2003of Britomart station on the site of this station’s predecessor, behind and below the former Chief Post Office. Much of the station's business was suburban traffic, augmented by express services to Wellington and other centres, but a steady decline in traffic since the end of World War II and latterly the high commercial value of the site led to the decision to vacate the building, now student accommodation.

Auckland was one of New Zealand’s finest stations. Lauded at the time of its erection, the building represented an attempt to emulate the large American railway stations built earlier in the 20th century. Like Wellington (see p. xx) the building is unashamedly grandiose, but with a refinement lacking in its southern counterpart.

Auckland's role as a gateway for visitors to the country was reflected in the care and expense taken in the provision of its railway station. While the intense use of rail in Auckland lasted only a few decades after the station was built, the importance of the station as the District offices, and as a major Railways Road Services passenger and parcels base, lasted until the 1980s.

Occupies an elevated site off Beach Road, behind a landscaped garden 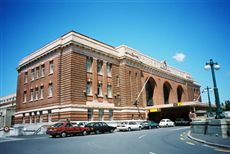 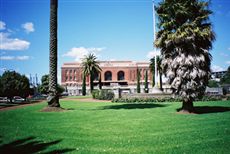 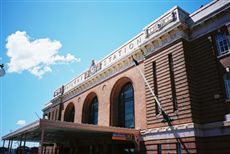