Cass is a small, simple, timber-framed lean-to structure. The building is clad with shiplap weatherboards and the roof is corrugated iron. There are two rooms: one a waiting room, the other, with a double-door entrance, is a goods or parcels office, now not used.

Cass is a stop on the Midland line, and it was its terminus from 1910 to 1914 while the line pushed its way towards the West Coast. The history of the building is not clear. The first station building, a shelter shed, was approved and completed at a cost of £90 in 1911 - this may be the present station. A shelter was requested for Cass when it "ceases to be a temporary terminal". A goods shed was also erected at the time. In 1913 a refreshment room, long since removed, was added. The first station was augmented, reasonably soon after, by another, larger, building. Photographs show a class B station there while it was a terminal. This building was removed in the 1920s when the Otira tunnel and the Midland line were completed. In 1936 or 1937 Cass featured in a now-celebrated painting of the station and nearby mountains by Rita Angus. It serves as the base for track maintenance gangs in this difficult, mountainous section of railway. The stockyard closed in 1979 and the goods shed was removed in the late 1980s. Since 1986 Cass has been used for passengers and for operating purposes only.

Cass is a modest yet original railway building. It is representative of the hundreds of small station buildings, in this case a shelter shed with parcels room, a standard design from the early 20th century (PWD 23251/1907) that was once one of the most common buildings on the rail network.

Cass's principal claim to fame is as the subject of the Rita Angus painting. This painting, now almost an icon in New Zealand culture, represents a view which can still be enjoyed today. Like any other small rural station Cass has had an important local role, in this case originally for high-country farmers, now for tourists and trampers.

Views very similar to Rita Angus' famous depiction of Cass can still be enjoyed. With its mountain backdrop, it is in a very picturesque setting.

In a remote spot in the eastern foothills of the Southern Alps. 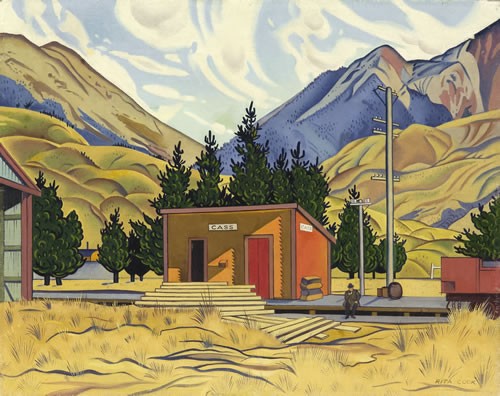