Waverley began as a Vogel class 4 station, a lean-to design with a central lobby, to the left viewed from the track an office, and to the right a ladies' waiting room with adjoining toilet. The building has been much extended but remains compactly rectangular in shape with an incorporated verandah. Rusticated weatherboards clad the building and the roof is corrugated iron. The addition of the verandah (1912) gave the building a gable form. It sits on six railway-iron posts, and the decorative valancing at both ends is cut to form a scalloped edge. The lobby has been enclosed and there are additions to both ends of the building. Some features of the original elevation, including one small arched ticket office window, remain. The interior retains its match-lined walls and some sash windows. Access to some rooms is gained via the elevation away from the track.

Waverley was built in 1881 as part of the Foxton-Carlyle railway. The contractors were McFarlane and Swinbourn and the building cost £1,125 to erect. There were no documented changes until a verandah was added to the building in 1911, and in 1939 new toilets were provided. The most substantial alteration to the original building was the enclosure of the open lobby in 1956. The vestibule was protected against the elements by a swinging door from the platform, while the ladies' waiting room was relocated. In 1981 a gang amenity was provided in the building, and walls and partitions were rearranged to make room for lockers, toilets, showers and a communal room. In 1986 it became a special purpose station. Until 2013 the building was leased to the Friends of the Waverley Railway Station, but is currently unoccupied.

Waverley is the finest extant example of the modified Vogel class 4 station. No original examples of the class 4 station exist, which adds further to the building's importance. It is also an important element in one of the most complete rural railway station precincts. Complete with the goods shed, loading bank and sidings, it provides a now very rare railway experience.

Waverley is one of the country's oldest extant station buildings. An original building on the Foxton-New Plymouth railway, it serviced the developing Wanganui hinterland and then the established rural community for over 100 years. It is a fine representative of the typical country station.

In the lee of a large sawmill outside the town centre, and remote form the road entrance to its site, Waverley makes little impact on its surrounding rural landscape.

A rural setting, with sawmill buildings and a few houses adjoining 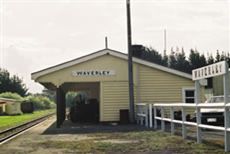 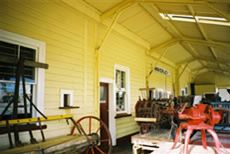