Wellington is Classical in design, although there is little external decoration. The building has reinforced-concrete foundations and walls, the latter faced with brick or plaster. It is U-shaped and consists of a main block and wings, which partly enclose the platforms. It is six storeys high in one place, although much of the building is taken up with the huge public spaces and concourses. The principal feature of the main elevation is the imposing entrance with its eight Doric columns. The building's monumental appearance is softened somewhat by the domestic-style hipped Marseilles-tile roof. The interior is no less grand with two huge well-lit public spaces; one the booking hall, with its massive vaulted ceiling, and the other the concourse. Around these are many offices, some still with original fittings, and the accompanying corridors and facilities.

There were two Wellington stations for over 50 years. Lambton Station (1880) replaced Wellington's first station at Pipitea Point, built in 1874 and burned down four years later, and served the Wairarapa Line. Thorndon Station was built by the Wellington and Manawatu Railway Co. in 1886 and was opened for the inauguration of the company's line to Longburn. Railways took over the company in 1908 and within four years there was agitation for a combined station. In 1922 a specific plan was devised and reclamation work began later that decade. A contract was let to the Fletcher Construction Co. Lid at a price of £339,173. Work began on the station proper in 1933 and the building was opened on 19 June 1937, eight years after designs were first prepared by the architects Gray Young, Morton and Young. The huge station also housed Railways’ head office, and was the terminus for both national and suburban passenger services, a role it retains to this day. It remains New Zealand's busiest passenger station

Monumental in scale and appearance, Wellington is the biggest station built in New Zealand. Its imposing city elevation was regarded as appropriate for a “gateway" station and it has obvious landmark qualities. The booking hall is s most impressive space. Highly regarded by commentators at the time it was built, Wellington is now considered a late example of Classical architecture and the patina of age serves it well.

Wellington has been a head office and the busiest station on the New Zealand rail network for well over 60 years. When built, its size and grandeur were expected to demonstrate not only the national importance of the railway but also its vital role in transport and communications in the capital city.

Wellington's eight huge Doric columns are the most distinctive feature of one of the city's best-known landmarks, well-presented with open space in front of the building.

On the edge of the city centre, near the older part of the port 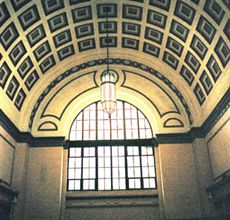 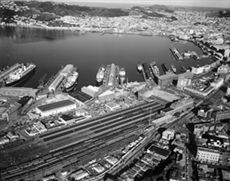